Known for attracting ducks, it is a long season millet, needing 120 growing days, whereas most other millets are only 60 day millets. This allows Chiwapa to be planted earlier in the growing season when rainfall is plentiful and still be standing when the first frost arrives. The large seed head, tolerance of flooding during the growing season, long maturation and preference by waterfowl sets it apart from all other millets. 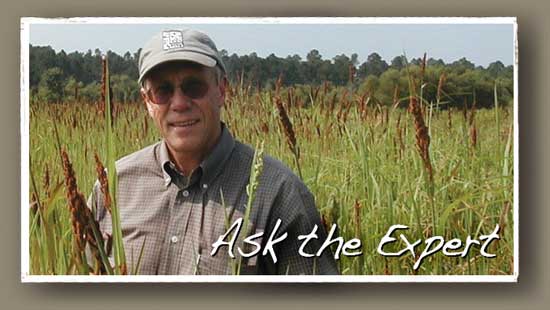 "I have used Chiwapa millet as an alternative to and mixed with Japanese, browntop, and wild millets and moist-soil plants. Waterfowl readily use Chiwapa millet, and its robust stem persist after floowing and doesn't tent to topple as do Japanese and browntop millets. I recomment trying Chiwapa millet in you moist-soil units."  - Dr. Rick Kaminski - Waterfowl Ecologist, Mississippi State University

Japanese Millet is prone to seed loss. In warm, wet conditions the seed will sprout, leaving no seed for ducks to eat.
Chiwapa's large root base allows it to remain standing longer than any other millet. The strong stem keeps the seed head off the ground and out of the mud allowing it to remain viable throughout duck season.

Chiwapa millet is the premier waterfowl millet.  Its year-after-year success in attracting and feeding ducks all winter long has made it the #1 choice for serious waterfowl hunters.

Why is Chiwapa Millet the Best Millet for Ducks?

Chiwapa is a 120-day crop.  It can be planted earlier in the growing season when rainfall is frequent and insect pressure is lower.  Planted early, Chiwapa will make a seed crop before late growing season pests like army worms appear.

Chiwapa has a large, robust stalk.  The larger diameter stalk helps the stalk stay standing longer which helps preserve seed quality.  The longer the seed remains viable, the more ducks you will feed for a longer period of time.

Chiwapa is known for its reseeding capability.  It is not uncommon to have Chiwapa come back as a volunteer crop 1, 2, and even 3 years after the initial planting.

Chiwapa makes a lot of biomass which is attractive to invertebrates.  Chiwapa’s leaf structure is long and linear which is the preferred shape for invertebrates.  Ducks key in on invertebrates as they are important to their diet for protein. The invertebrate load and great seed yield of Chiwapa, is the farming for ducks 1-2 punch.


Grows in a Wide Range of Soil Types:

Chiwapa can tolerate and even thrive in flooded conditions.  It can be grown in a shallow flood environment like rice.  If your waterfowl impoundment is prone to flash flooding during the growing season where the water can get too deep for other crops, you should consider planting Chiwapa.  It has tolerated being overtopped with water for short periods of time with no mortality.

Chiwapa can be top-sewn onto mud or can be planted into a well-prepared seedbed.

You’ll only need to plant 15 lbs of Chiwapa per acre drilled or 20 lbs/acre broadcast.

Chiwapa is not a fertilizer-intensive crop.  Twenty units of nitrogen or 200 lbs of 13-13-13 are often all it needs. Taking soil samples removes all guesswork.


Wide Planting Window:
Chiwapa planting is best from May 1 – June 15 for most of its range and as late as July 15 in coastal areas.

Chiwapa is the workhorse of duck foods.  It works all summer long to ensure you have plenty of ducks all winter long.  It is hard to attract and hold ducks without food.  If you plant Chiwapa, you will have planted the best millet there is for ducks and geese.  The amount of seed it produces and the number of invertebrates it attracts are second to none.

In the areas of the United States where the growing season is 120 days long, Chiwapa millet is the best millet to plant for waterfowl.  It is also a great choice for upland game birds including dove, quail, and turkey.

Chiwapa is an excellent food crop for doves, quail, and turkey.  It provides both food and cover.  It can be planted and managed like other millets.  Every characteristic that makes chiwapa a standout waterfowl crop like abundant seed production, flexibility in soil types, and a long growing season make it a good choice for upland game birds.

Chiwapa Millet for Ducks
Cover and concealment are vital to killing ducks.  Hunters need to be able to hide and not be seen by a duck’s keen vision.  Chiwapa works well when planted to hide and conceal hunters.  It can be planted to hide blinds and planted along the edges or in the middle of impoundments for hunters to stand in.

Chiwapa’s large stalk helps it stay standing longer and less resistant to falling over.  Do not worry about ducks being able to access the seed, as it will shatter naturally from the seed head as it ripens after maturing.  Also, the stalks will fall over, allowing the seed head to get in the feeding range of ducks.  As the stalks fall over, it creates cover and open water referred to as “hemi-marsh”.  Research has shown ducks like hemi-marsh.

Chiwapa Millet for Doves
For doves, chiwapa millet can be baled for hay, bush hogged, and/or burned to make the seed more available for doves.  Check your state dove hunting laws to be certain, but in most states, these are legal dove field management methods.  However, these are not legal manipulation methods for waterfowl.  Do not confuse what is permissible for doves as the same for ducks.  Call your state’s wildlife department with any questions.

Chiwapa Millet for Quail
Chiwapa works well for quail, providing both cover and food.  Quail are light scratchers, so the seed needs to be at the surface of the soil to be accessible.  Cover is also very important for quail to protect them from avian predators, especially hawks.  Chiwapa provides cover both when the stalks are standing and when broken over.

When planting Chiwapa, the seed can be planted into a well-prepared seedbed or broadcast on the top of freshly exposed mud.  Optimum planting dates for Chiwapa millet are May 1- June 15 and when the soil’s average temperature is 70o.  Rainfall is normally more abundant early in the growing season than later in the growing season, so the earlier you plant, the less likely drought will affect your crop.

Chiwapa is tolerant to shallow flooding and can be grown in water just like rice. However, it does not have to be grown in standing water.  It is often recommended for hunters to put 1-2 boards into their water control structure when the Chiwapa is approximately 12” tall.  Ideal water depth on the growing millet would be 6” or less.  Too much water can push the millet to grow taller, making it more prone to lodging or falling over during the growing season.  Catching and holding some water on Chiwapa during the growing season will help keep the soil moist and promote some moist soil plants, creating a buffet for ducks.  The additional moisture in the soil will also give you a jump start to pooling water for duck season.  Optimum feeding depth is when the water is 16” or less for dabblers.  If you have deeper water areas in your impoundment, Chiwapa is an excellent choice.

Chiwapa is a versatile crop.  In addition to providing forage for waterfowl and upland game birds,  chiwapa works well for wildlife, livestock forage, and as a cover crop. Chiwapa is easy to plant and requires little to no fertilizer.  It improves soil health by reducing erosion, breaking up hardpans, and mining soil nutrients all while producing wildlife and livestock forage above ground.  When you’re ready to plant your food plots for waterfowl and game birds, browse Specialty Seed’s quality selection of Chiwapa millet for sale and get ready for the hunt!